Low cost luxury? Judgment comes down on imitations of a Longchamp handbag 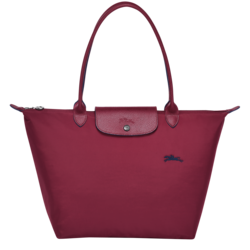 Summary of commentary on judgment No. 401/2017 of 15.9.2017 by the Provincial Appellate Court of Madrid (ECLI:ES:APM:2017:14041), published in the “Revista de Derecho de la Competencia y de la Distribución” [Competition and Distribution Law Magazine]

The conflict arose as the result of the sale on the GROUPON website of some vouchers that could be exchanged for handbags from the company SARASWATI (doing business as PRISAUK), whose design was reminiscent of LONGCHAMP’s 1623 LE PLIAGE model (hereinafter “LE PLIAGE) and the offering of which was accompanied by promotional phrases such as “dale un toque francés a tu outfit con un bolso plegable de estilo Longchamp” [give your outfit a French touch with a Longchamp style foldable handbag] or “bolso plegable de estilo Longchamp, lujo asequible con un toque francés” [Longchamp style foldable handbag, affordable luxury with a French touch].

Shown below is a comparative image with Longchamp’s LE PLIAGE handbag model and the handbags sold by SARASWATI on GROUPON and on its PRISAUK website: 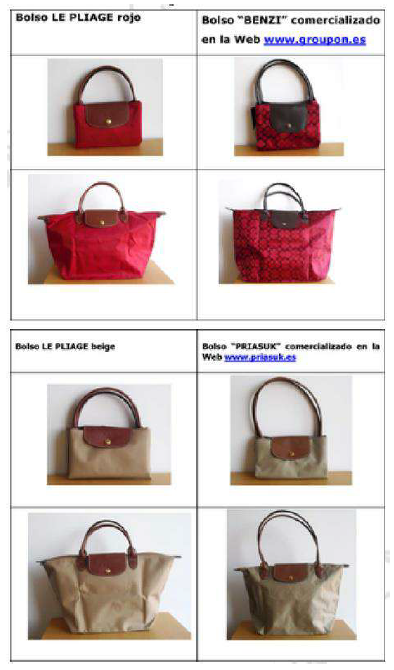 In view of the above sale of goods, CASSEGRAIN, as the owner of the intellectual and industrial property rights in the LONGCHAMP handbags and trademarks, and LONGCHAMP, as the manufacturer and exclusive distributor of the handbags, instituted proceedings against SARASWATI and GROUPON on the grounds of trademark and copyright infringement and unfair competition.

Specifically, the complainants claimed that the LE PLIAGE handbag warranted protection as an applied work of art and that the model sold by SARASWATI was a reproduction of said handbag.

Furthermore, they considered that the use on the GROUPON website of the LONGCHAMP trademark and of expressions such as “lujo asequible con un toque francés” [affordable luxury with a French touch], made reference to the origin and position in the marketplace of the LONGCHAMP trademark and constituted an infringement of said trademark, which is, moreover, well known in its sector.

Finally, the complainants considered that the use of promotional phrases such as “estilo LONGCHAMP” [LONGCHAMP style] constituted an act of imitation, exploitation of another party’s reputation, unlawful advertising and misleading acts capable of generating confusion or association, as referred to in the Unfair Competition Act.

In turn, the defendants disputed the well-known character of the LONGCHAMP trademark and that the LE PLIAGE handbag could be considered a work. Moreover, GROUPON tried to assert the exemption from liability provided for under the Law governing e-commerce, claiming that they had simply reproduced the description provided by SARASWATI and that they were unaware of the unlawful nature of the information on their website.

Specifically, the judge of the lower court held that it had not been demonstrated that Longchamp’s LE PLIAGE handbag model had the sufficient degree of originality and creativity to be considered a work under the Copyright Act and that since the LONGCHAMP trademark had not been used on the product but rather in the advertising, there had been no trademark infringement either, but rather acts of imitation and misappropriation of another party’s reputation, pursuant to Articles 11 and 12 of the Unfair Competition Act. The judge also concluded that GROUPON could not benefit from exemption from liability under the Law governing e-commerce, given that it had been proven that the design of the advertising of the handbags in dispute had been undertaken jointly between SARASWATI and GROUPON.

The full commentary, which may be accessed in issue number 22 of the Revista de Derecho de la Competencia y de la Distribución [Competition and Distribution Law Magazine], offers a detailed analysis of the main findings of this judgment, dealing with important issues for the fashion sector (“Fashion Law”), such as the protection of creations in this field under copyright (in this case Longchamp’s “Le Pliage” handbag model), the possible infringement of a well-known trademark when used in advertising accompanied by expressions such as “estilo”, “tipo”, “imitación” [style, type, imitation], the principle of the somewhat complementary relationship between the regulations governing exclusive rights and Unfair Competition law, and the liability of information society service providers in relation to such possible infringements.