FRUTARIA decision: General Court considers proof of use where trademark was assigned during relevant period

On 13 October 2021the General Court issued its judgment in Schneider v European Union Intellectual Property Office (EUIPO) (Case T-12/20), recalling relevant aspects of the proof of use of a trademark subject to a revocation action. This includes findings concerning the validity of the evidence provided by a former proprietor when the trademark has been subject to an assignment, use as a trademark, distinctiveness and use for a sub-category of goods.

On 17 May 2017 Markus Schneider filed an application for revocation of the EU trademark FRUTARIA. Accordingly, the trademark holder was obliged to prove use of the trademark in connection with all the relevant goods and services for the period between 19 May 2012 and 18 May 2017 – the first part of the relevant period was thus prior to the assignment, while the second part was after.

The trademark holder submitted to the EUIPO several items of evidence for the purpose of establishing use of the contested trademark. The Cancellation Division partially upheld the application for revocation, but rejected it in respect of certain goods and services in Classes 29, 31 and 35.

Schneider appealed the decision. In a decision dated 8 October 2019, the First Board of Appeal partially upheld the appeal, maintaining the registration of the trademark for certain goods and services in Classes 29, 31 and 35.

Schneider appealed to the General Court, relying on a single plea in law alleging:

The General Court considered that the assessment of the First Board of Appeal was right and dismissed the action in its entirety.

The General Court recalled that the transfer of a trademark cannot lead to its new proprietor being deprived of the opportunity to adduce proof of genuine use in the course of the relevant period during which it was not the proprietor of the mark: although Article 15(2) of Regulation 207/2009 states that use of a trademark by a third party with the proprietor’s consent amounts to use by its proprietor, in this case, use of the trademar was made directly by the company which owned the trademark at the time in question.

As regards genuine use of a trademark where the trademark is used in accordance with its essential function, the court emphasised that the fact that a word element is used as a company’s trade name does not preclude its use as a trademark to designate goods or services. Moreover, it considered that the supporting evidence submitted to the EUIPO (images of the boxes generally used for transporting fresh fruit and vegetables) can be used as additional elements for confirming genuine use of the trademark.

The court dismissed Schneider’s comments on the failure to use the trademark as it was registered: while there were notable differences between the trademark as registered and the trademark as used during the relevant period, those differences were not capable of significantly altering the distinctiveness of the mark. This conclusion was based on the finding that the element ‘frutaria’ was still the dominant and most distinctive element of the signs (as depicted below), and that the amendments were to be considered ancillary, as they would be perceived merely as a modernisation of the sign. 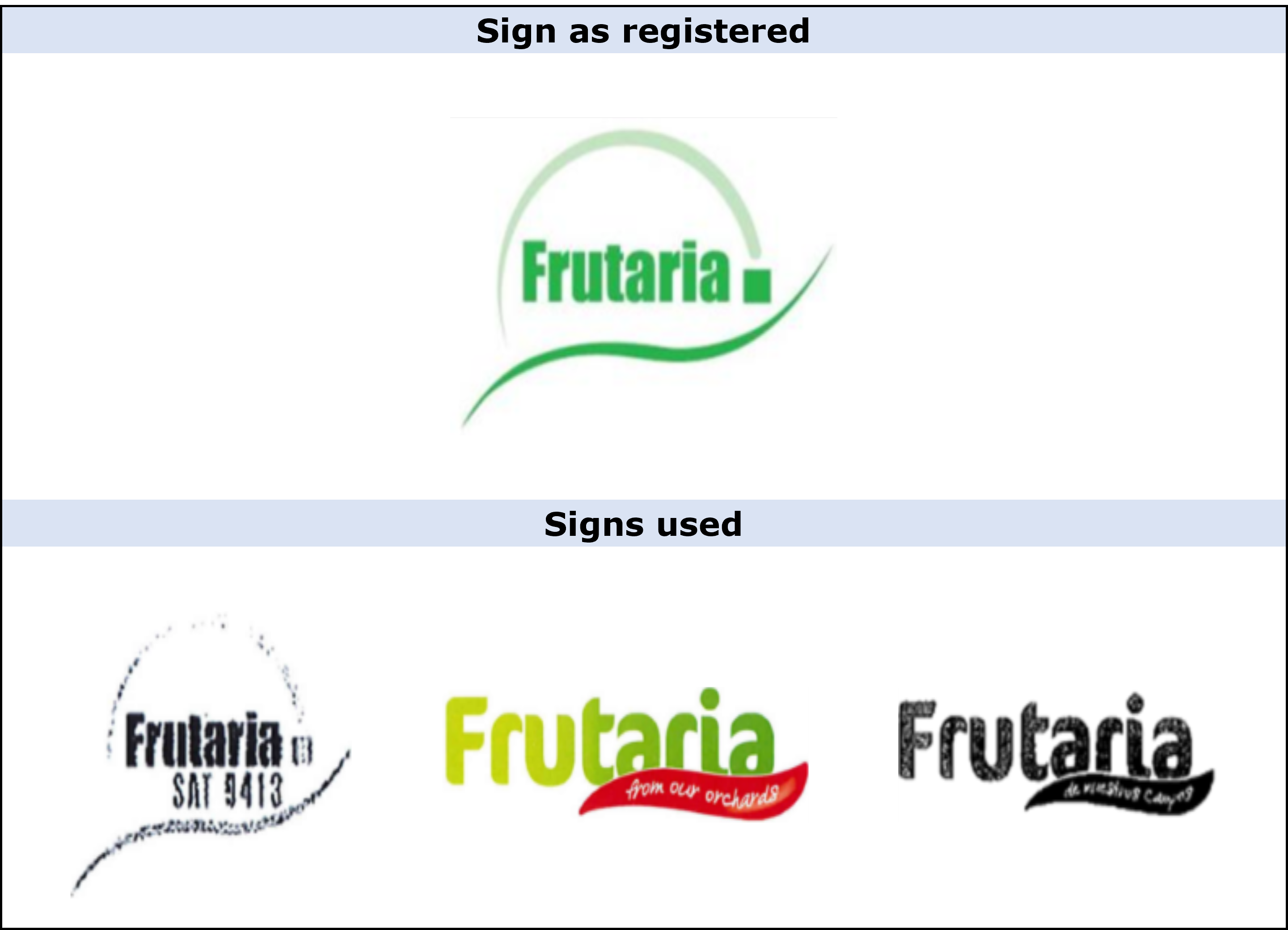 Lastly, the court found that the fact that the proof of use filed with the EUIPO was furnished only for the sale of products to a single customer did not make it possible a priori to rule out its genuineness. Accordingly, it accepted that the one-off sale of dried plums to a single customer was sufficient to establish genuine use for the category of “dried fruits” in Class 29.

This judgment sheds light on the consideration that must be given to the proof of use that a trademark holder can submit in a revocation action when the trademark has been assigned during the relevant period established by Articles 15(1) and 51(1) of Regulation 207/2009. It also provides valuable guidance on the court’s criteria as to the requirement of use of a trademark as registered, notwithstanding the modernisation and alteration of non-essential elements, and on the suitability of small sales for establishing genuine use in connection with certain categories of goods.

Europe European Union litigations
This entry was posted on Monday, November 29th, 2021 at 5:56 pm and is filed under Elzaburu. You can follow any responses to this entry through the RSS 2.0 feed. You can leave a response, or trackback from your own site.